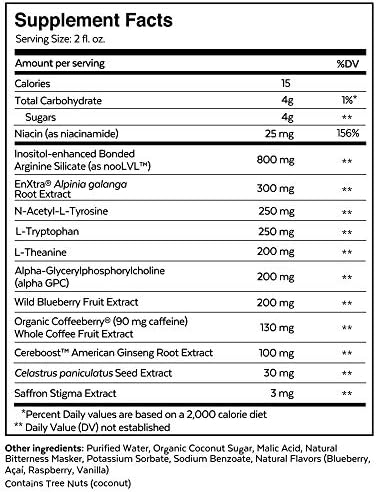 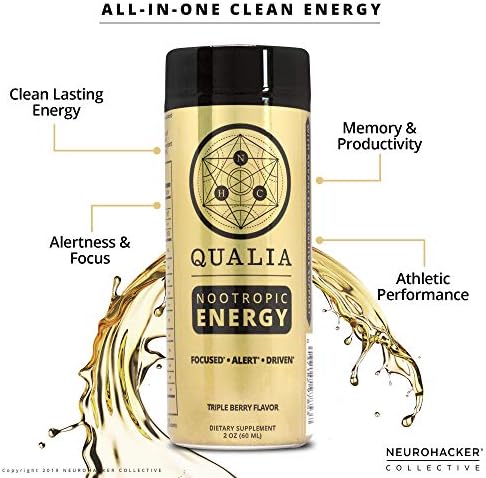 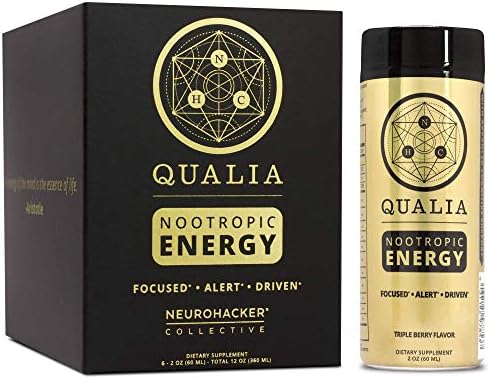 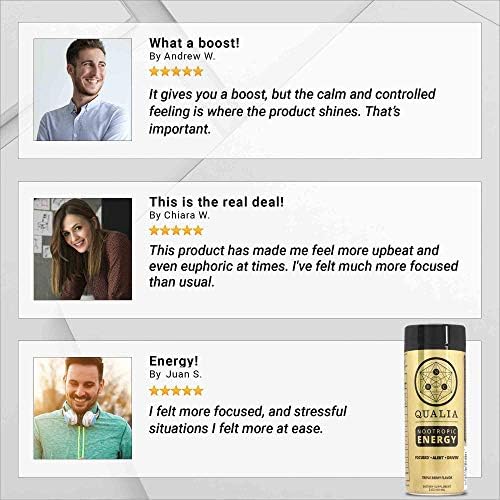 Qualia Nootropic Energy Shot was formulated by taking into account which brain functions, neurochemical systems, and physiological processes we could target to quickly boost cognitive performance. Years of research led us to a formula containing nootropic compounds, vitamins, amino acids, fruit extracts, and herbal extracts that work well together in supporting a fast enhancement in mental energy, focus, cognitive processing capacity, and productivity.

EnXtra Alpinia galanga Root Extract: In a clinical study, supplementation with EnXtra supported alertness and focus for up to 5 hours with and without caffeine. EnXtra can be used as a replacement for caffeine or used with caffeine to prevent a crash and prolong caffeine’s nootropic benefits, especially with enhancing reaction times.
Cereboost American Ginseng Root Extract: A ginseng root extract standardized for ginsenoside content. Ginsenosides are thought to be responsible for many of the adaptogenic (i.e., stress and fatigue support) and health-promoting properties associated with ginseng. Cereboost is known to enhance attention accuracy, working memory, and secondary memory.
NooLVL: Supports blood levels of L-arginine, which promotes circulation to metabolically active tissues, like the brain and muscles. This plays a big role in allowing these tissues to perform their functions at a high level. NooLVL enhances exercise performance and post-exercise recovery, while also supporting brain performance, promoting mental flexibility, focus, processing speed, and executive function.
Organic Coffeeberry Whole Fruit Extract: A source of caffeine known to enhance alertness, processing speed, and motor reflexes.
Celastrus paniculatus Seed Extract: Celastrus paniculatus is native to India, where it’s used by local healers primarily as a brain tonic for reasons that are consistent with one of its common names, “the intellect tree.” Today we’d recognize these uses as offering nootropic support. These uses include enhancing mental acuity, supporting memory, and alleviating mental fatigue, stress. It was believed that people using this plant would be able to learn new information more quickly, and more accurately and efficiently recall it later.
Alpha-glycerylphosphorylcholine (Alpha GPC): Alpha-glycerophosphocholine (alpha-GPC) is a nutrient that’s very important for the brain and muscles. The brain uses it to build a chemical messenger (neurotransmitter) called acetylcholine, which is involved in brain functions including attention, concentration, mental focus, and memory formation and recall. Acetylcholine is also involved in activating muscles. So boosting it can help muscles work more efficiently, especially in activities that require power or force.*
N-Acetyl-L-Tyrosine (NALT): N-acetyl-L-tyrosine (NALT) is an acetylated form of the amino acid L-tyrosine. It is used as a nootropic because it acts as a precursor for important brain neurotransmitters. Brain neurotransmitters have a large role in brain activities linked to reward, motivation, and pleasure, and plays a crucial part in modulating focus, motivation, cognitive flexibility, and emotional resilience. It’s also one of the main regulators of motor control and coordination of body movements, so is also important for exercise and muscle performance.*
L-Tryptophan: L-Tryptophan can be used to make and important cellular energy compound called NAD. L-tryptophan has enhanced aspects of exercise performance when taken before working out, presumably because of this role in cellular energy production. L-Tryptophan is also a precursor for the synthesis of the neurotransmitter serotonin. This might be why low-to-moderate doses of L-tryptophan supports skills that fall into the social cognitive domain: these include prosocial behaviors like cooperation, empathy, getting along with others, and altruism. And L-tryptophan can be used to make the neurohormone melatonin, which regulates sleep-wake cycles and nighttime body clock functions. This has led to L-tryptophan being used to support healthier sleep cycles.*
Niacinamide (Vitamin B3): Niacinamide can be used to make NAD. NAD is found in every cell in the body. It’s used to (1) make cellular energy (ATP), (2) protect cells from damage, and (3) activate processes linked to healthier aging. Research shows that as we age levels of some NAD metabolites (NAD+ as an example) decline substantially. This decline leaves us at greater risk for unhealthy aging because without sufficient NAD+ cells aren’t able to do the work needed to perform at their best. Many scientists and doctors believe maintaining higher levels of NAD+ is one of the keys to increasing the amount of time we spend in good health.*
Wild Blueberry Fruit Extract: Wild blueberries (Vaccinium angustifolium) are native to North American and are both smaller and have more intense color than cultivated blueberries. They also have higher anthocyanin and polyphenols content, which are the phytochemical compounds that are thought to be largely responsible for why blueberries support cognitive function, vision and brain health.*
Saffron Stigma Extract: Saffron has been used and traded as a spice for at least 4000 years and is considered the world’s most costly spice by weight. There’s been a growing body of scientific research in the use of saffron for health purposes, including in areas such as mood, cognition, vision, sports performance, appetite regulation, metabolic function, and women’s health.*

At Neurohacker Collective we are focused on making groundbreaking products for wellness and publishing the best health content from the most effective minds in the world. We are a group of scientists, intellectuals and researchers who are passionately working to develop an integrated strategy of complete care for the self. Everything we do at the Neurohacker Collective starts with a deep respect for the complexity of human biology. No overriding the body’s natural functioning or tinkering with parts in isolation. Instead, we develop increasingly robust models for understanding how the brain works in concert with the other systems of the body, then support and enhance those underlying processes as part of an integrated whole.

*FDA Disclaimer: These statements have not been evaluated by the Food and Drug Administration. This product is not intended to diagnose, treat, cure, or prevent any disease

SUPPORT SEROTONIN PRODUCTION – You’re more productive when you’re happy, which is why we designed each energy shot to support serotonin production.
LOW SUGAR, LOW CAFFEINE – With four grams of sugar and the same amount of caffeine you’d find in a small cup of coffee, you can trust our energy shots to give you the boost you need, without the crash.
UPREGULATE ANTIOXIDANT DEFENSES – Keep your cells healthy and protected from free radical damage by upregulating antioxidants, which can help to inhibit oxidation in the body.
100 DAY MONEY BACK GUARANTEE – We are confident you’ll love Qualia brain and memory supplements as much as we do. If you don’t, just let us know and we will refund your purchase, no questions asked. Try it today risk-free.